Some of the animals have ongoing health issues

KEENESBURG, Colo. — Staff at The Wild Animal Sanctuary know all about a roadside zoo in Oklahoma where an eccentric guy named Joe kept dozens of tigers and other exotic animals. They were at the zoo in 2017 when they rescued some of the animals and transported them to Colorado.

“It’s not about the Netflix film, it’s not about anything other than we are trying to give them the best life possible,” said Becca Miceli, Chief Science and Animal Welfare Office.

Miceli joked that she has a fancy title as she explained her job consists of riding around on a 4-wheeler all day and taking care of animals. She said she was reluctant to watch the Netflix series ‘Tiger King’ but wanted to see how the show portrayed the captive wildlife crisis.

“It was difficult, I mean a lot of this stuff we saw for ourselves when we were there, the small enclosures, the indiscriminate breeding, the cub experiences, the exploitation, so all of that was very apparent when we were on the rescue,” said Miceli.

The sanctuary has 39 tigers and three black bears from Joe Exotic’s zoo. Staff explain it took time for the animals to adjust to having more space in their new home.

“You know try and provide them with as many freedoms that people unfortunately tried to take away from them,” said Miceli. 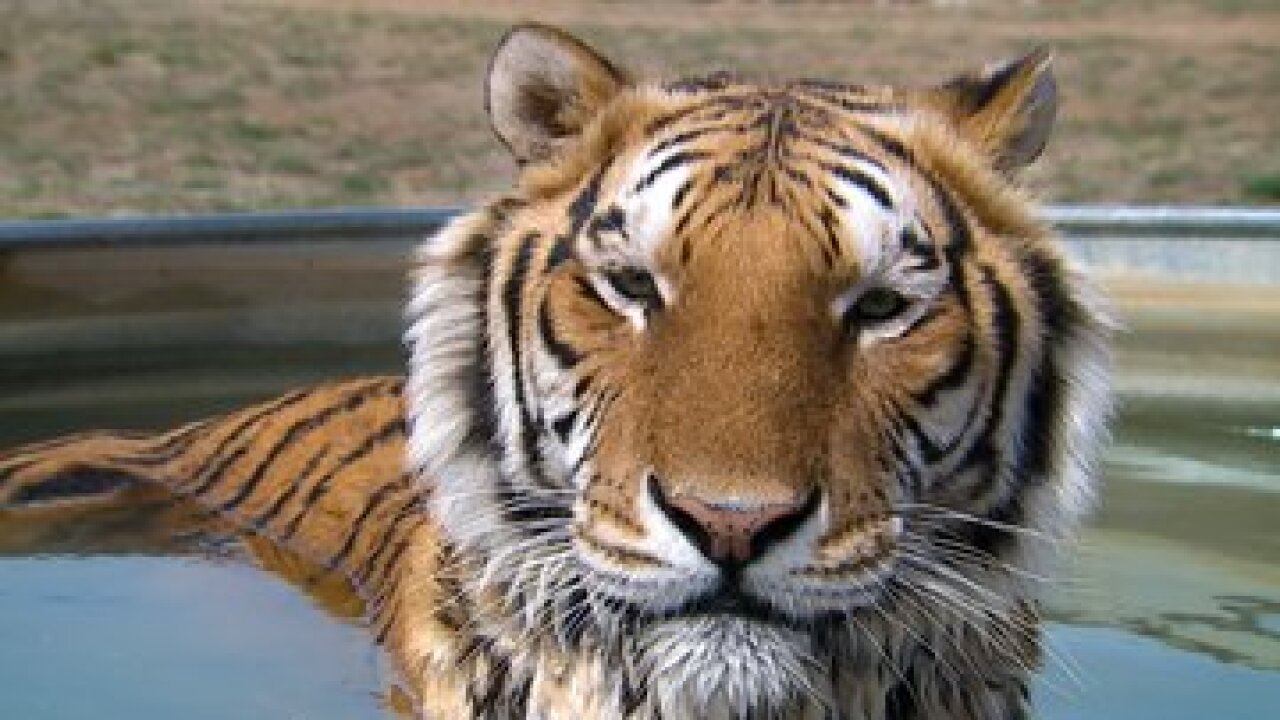 Miceli introduced us to a rowdy and playful bunch of male tigers who are living together in a spacious enclosure. As she approached the fence, it was clear they know her and began making noises.

“What? You are so talkative,” she said to the tigers as she called out their names.

There’s Thomas, Clay, Daniel and Enzo. Clay seemed to be especially vocal, as he interrupted our interview several times.

“We try and give them large open spaces, plenty of place to run, decide what they do throughout the day, if they want to lay in the sun, play in the water, scratch on a log,” said Miceli.

Staff believe this group of tigers would have been anywhere from 2 to 4 years old when they arrived at the sanctuary. Miceli said many of Joe’s animals had health problems. She said some of them continue to have ongoing physical issues and mental trauma, adding that a few of the cats had been declawed by the previous owner.

“They did have some issues when we first got them, a lot of dental issues, things of that nature. Unfortunately, they did have some nutritional things that once they got on a better diet, had some things supplemented that they needed, some specific vitamins that big cats can lack,” said Miceli.

Miceli said the Netflix show highlighted what many people in her line of work already know about the exploitation of exotic animals. She said one of the most disturbing parts of the documentary was when filmmakers alluded to the tigers being euthanized when they were deemed too old to profit from.

“Those are all living beings to us and we want to see them flourish, that more than anything was the most troubling,” said Miceli.

She hopes the series will inspire people to protect big cats and other exotic animals.

“I think hopefully it brings some light to the crisis that we’re in with large exotics in this nation. I hope that people don’t just take from the documentary the sensationalism of the characters, they actually look beyond it now and see the animals,” said Miceli.

Colorado’s current stay-at-home order has forced the sanctuary to close its gates to visitors. Donations are still being accepted online.

“We sure hope that people come out and visit and still get to experience the sanctuary when that time comes and it’s safe for the nation,” said Miceli.

When visitors are allowed once again, you can expect a very different from anything you’ve seen while watching the “Tiger King.” All of the tigers are neutered so there’s no breeding or cub petting and they do not take photos of people with the animals.

“We have an elevated walkway and the reason why we do that is, it creates a lot less stress on the animal,” said Miceli.

DUI driver crashes into 4 cars, spits on officer, says ‘there’s some corona for you’

6ix9ine has been released early from prison due to the coronavirus