I guess you could say, it wasn’t meant to last Forever. I’m sure that joke has been made at least 21 times today. But Bloomberg Business is reporting that the once-favorite mall store of teens and delusional adults (raises hand) is probably going to declare that their financial situation is as messed-up as the hem of a Forever 21 crop top after a trip through the washing machine.

Earlier this month it was revealed that Barneys had to declare bankruptcy, breaking the hearts of those who want to pay $89 for socks. Apparently people who want to pay $0.89 for socks aren’t safe either. Bloomberg says that people familiar with the situation say that Forever 21 Inc. has been working with a team to help them restructure their debt and procure financing, but that negotiations with possible lenders hasn’t gone anywhere, and they’re still in deep debt. The sources say that filing for Chapter 11 bankruptcy looks like the final solution to their money problems.

If Forever 21 does declare bankruptcy and closes a bunch of stores, malls might have trouble filling the empty spaces. One mall tells Bloomberg that Forever 21 was its sixth-largest tenant (excluding department stores). And in a world where more people are buying online, it would be difficult to find someone just as big to move in.

This is especially ironic, considering Forever 21’s subtle branding. If you’ve ever shopped at a Forever 21 store, then you know that printed on the bottom of their shopping bags is the bible verse John 3:16.

Has anyone else noticed at the bottom of the @Forever21 bags it has John 3:16 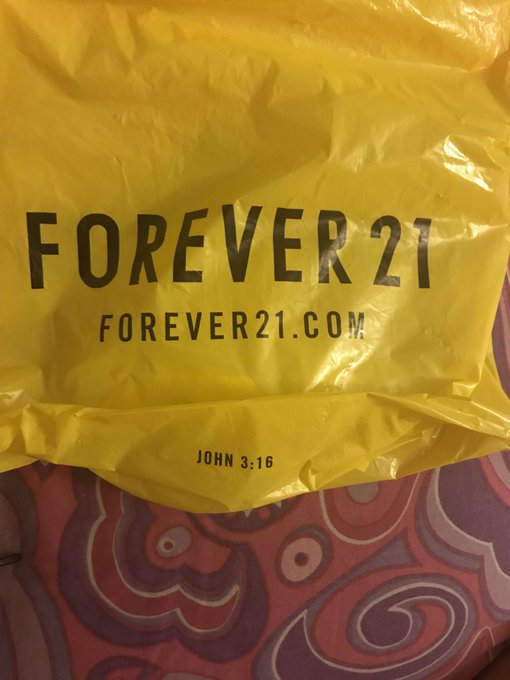 John 3:16 is all about God giving the world his only son so that everyone would have eternal life. In a cruel twist of irony, it looks like the only thing that will get eternal life is that plastic shopping bag. And much like Jesus, many Forever 21 stores might soon die and exist as a spirit of extremely cheap trendy fashion. Remember when everyone went to the tomb and was like, “Hey, where’s Jesus?” That will be some malls soon, and the tomb will be an empty Forever 21 with a sign that reads FUTURE AMAZON PICK-UP LOCATION on the outside.

Forever 21’s problems may have to do with expanding too big too fast (there are currently more than 800 stores in the US, Europe, Asia, and Latin America). It could be too much cheap fashion competition, like from H&M, Target, and various online retailers. Perhaps people didn’t love getting diet bars in their orders. But it’s not too late to find an investor willing to sink millions into Forever 21.

WATCH: Nas Relaxes at an Oceanside Villa in Tropical ‘No Bad Energy’ Video

Where fireworks are and are not legal in Colorado