Lizzo On “Truth Hurts” Plagiarism Claims: “That Song Is My Life, And Its Words Are My Truth”

The famed singer responded to the claims on social media.

Hours after Lizzo’s hit single “Truth Hurts” made history on the Billboard Hot 100, the Texas native decided to clear the air on a cloud of plagiarism claims. Taking to Twitter on Wednesday (Oct. 23), the 31-year-old addressed songwriter Justin Raisen’s statement that she lifted the line “I just took a DNA test, turns out I’m 100 percent that bitch” from a 2017 studio session. The lyric was reportedly inspired by singer Mina Lioness’ tweet that became a meme, who Lizzo states recently received a credit.

“The men who now claim a piece of Truth Hurts did not help me write any part of the song,” Lizzo wrote. “They had nothing to do with the line or how I chose to sing it. There was no one in the room when I wrote Truth Hurts,” noting that she, famed producer Ricky Reed were the only people who worked on recording the song. “That song is my life, and its words are my truth.” 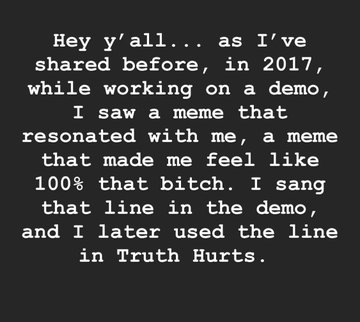 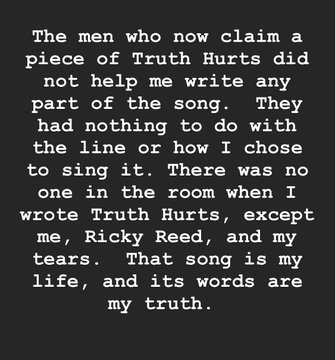 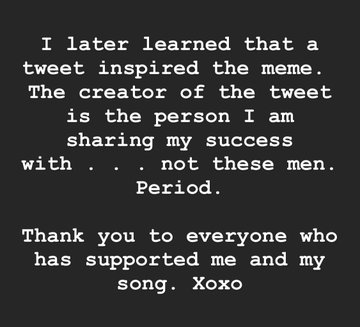 2,690 people are talking about this

“Truth Hurts” wasn’t the only melody to come under scrutiny. Lizzo’s “Juice” was recently accused of lifting an ad-lib from CeCe Peniston’s “Finally.” Per a statement published by Variety, Lizzo’s publishing company Warner Chappell said, “There’s no substantial similarity between ‘Juice’ and ‘Finally’, and there’s no valid claim there.”

“Juice” is featured on the Lizzo’s third studio album, Cuz I Love You, while “Truth Hurts” is listed as a bonus track. The 2019 album entered at No. 6 on the Billboard 200 and was heralded as Lizzo’s highest-charting album thus far.

The Weeknd & Ariana Grande Announce ‘Save Your Tears’…