A trailer full of rare and expensive fossils for an exhibit at the Colorado Mineral and Fossil Show was stolen this past weekend.

The Colorado Mineral and Fossil Show kicked off its annual event this past weekend, as rock hounds and fossil hunters alike descend upon the Mile High City.

One group that made the trek to Colorado for the show has had less than a happy ending to their experience, as a trailer full of fossils brought to the show was stolen from their hotel parking lot in Aurora. GeoDecor brought a trailer with over $100,000 of fossil specimen to the fall showcase, only to have that trailer stolen on Sunday evening from the Crowne Plaza Convention Center Hotel, located on 15500 East 40th Avenue.

The stolen trailer, courtesy of GeoDecor

Around 6 p.m. on Sunday, company president Thomas Lindgren discovered the trailer to be missing, along with all the valuable historic artifacts inside it. The trailer itself is valued at $11,000 and was only recently purchased by GeoDecor. It’s a 20-foot-long trailer that Lindgren only purchased a couple of weeks ago, silver-colored, with a “Loadrunner” logo on one side near the back.

Lindgren says the trailer contained 13 fossils, all worth thousands of dollars each.

“The theft of the fossil shark is particularly heartbreaking,” stated Lindgren, “because a museum was counting on adding it to their collection. Its high value is based on the fact that shark skeletons rarely fossilize because they are composed of cartilage, hence the $50,000 value.”

Some of the missing specimens include: 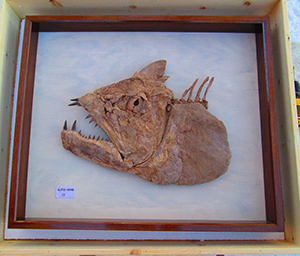 GeoDecor stated in an official release through the Association of Applied Paleontological Sciences that the company is offering a $1,000 reward for any information that leads to the recovery of the trailer and what’s inside. Anyone who sees the trailer or any of the fossils, or has information on the whereabouts of the silver trailer should call Aurora Police Department at (303)-739-6000 or dispatch at (303)-627-3100. Detective A. Roberts of the Aurora Police is working the case.

Lindgren also shared that GeoDecor will not press charges or ask questions to anyone who returns the trailer and all its contents to the front parking lot of Crowne Plaza Convention Center Hotel.

This is an unfortunate event, and it’s not clear what anyone would want these things for, as they are likely to be recognized as stolen, being one-of-a-kind fossils, and not likely to be easily sold. With the company willing to let the whole thing go if everything is returned, hopefully, whoever took them does the right thing. We will be keeping our eyes peeled around town for any sign of them.

The Colorado Mineral and Fossil Show is running until September 14, so stop by while you still can!

The Weeknd & Ariana Grande Announce ‘Save Your Tears’…